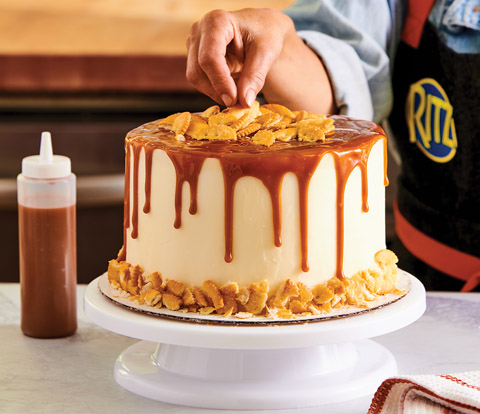 Cake: Mix butter and sugar with electric mixer fitted with paddle attachment on low speed until blended. Beat on medium speed until light and fluffy. Mix in oil until well blended. Add whole eggs and egg yolks 1 at a time, mixing well after each addition. Stir in vanilla.

Bake in 350°F standard oven 25 to 30 min. or until wooden pick inserted in centers comes out clean. Cool in pans 5 min. Remove from pans; cool completely on wire rack.

Gradually pour hot syrup down side of bowl, mixing on medium-high speed, and being careful not to let syrup hit the whisk. Continue mixing 15 to 30 min. or until mixture is cooled to room temperature.

Add softened butter 2 Tbsp. at a time, beating on medium speed after each addition. Add salt with last addition of butter. Beat on high speed until mixture is fluffy and smooth. Use immediately or store, refrigerated, in airtight container for future use.

To assemble cake, cut each cake layer horizontally in half. Place 1 layer on cake plate. Spread 1 cup Buttercream over top of cake. Repeat with 2 more cake layers. Top with remaining cake layer and 1-1/2 cups Buttercream. Frost sides with Buttercream, then pipe remainder around base of cake using pastry bag fitted with fluted tip.

Spoon caramel sauce over top of cake, letting it run down side. Sprinkle top and lower sides with coarsely crushed RITZ Crackers. Refrigerate until ready to use.